Hi everyone! I currently don’t have any new books to read and a sprained ankle. But you know what I do have? I have passion for movies. I’m actually currently taking a class called Hollywood Heroines: Women in Film for my senior seminar. This got me thinking and I wanted to share with you some of my favorite mainstream and/or indie films. While I do have a ton of movies I love, I’m just going to talk about five more recent films I’ve seen that struck me in a particular manner. I hope you enjoy this list. Let me know if you have seen any of these and what you thought about them.

A good majority of you readers have probably heard of this movie as it has been picking up plenty of award show buzz. If you haven’t, then I will give you a quick synopsis.

A young mute woman named Elisa works as a cleaning lady at a secret government lab. When she encounters a mysterious humanoid fish creature who is being studied, she and the creature form an intimate bond. Elisa decides she must save him from the sinister government agency who have bigger plans.

Now I am a huge fan of Guillermo Del Toro’s work. I was certainly interested by the bizarre and intriguing premise. Also, I’d be lying if I didn’t admit that I had read a lot about the sex scenes in this movie. Regardless, it is still a fairy tale-like and romantic movie with plenty of beautiful visuals. With a balance between the otherworldly and the realistic, The Shape of Water is certainly an experience that the viewer can lose themselves in with its romance and fantasy. 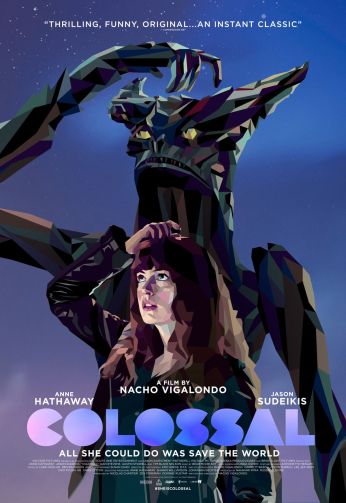 I stumbled across this movie after reading a review in Entertainment Weekly. It sounded interesting but I didn’t think I would get around to watching it. I ended up getting a hold of it and decided to watch it on a whim. I certainly didn’t regret it.

Gloria, an unemployed party girl, is kicked out her apartment by her exhausted boyfriend and decides to return to her hometown. Once she returns home, a monster appears in Seoul, South Korea. Gloria begins to realize that she is more connected to this phenomenon than she thought.

I know that a lot of people are not fans of Anne Hathaway but I have a feeling you might change your mind. She portrays probably the most messy and realistic character I’ve seen. The movie does an excellent job reworking the classic monster movie. It’s a nice balance of dark comedy, drama, and sci-fi. Give this one a try if you get a chance.

This one is pretty well-known for being snubbed severely during the 2016 movie awards seasons. At first, I didn’t think much of it until I was given the opportunity to watch this movie. Afterwards, I also became angry that this movie got snubbed. I also don’t really remember what the movie was up against. Regardless, here’s the premise:

Twelve stranger spacecrafts land on Earth and no one can figure out why they are here. Linguistics professor Louise Brooks is recruited to figure out a way to communicate with the inhabitants of the space crafts. Soon, she discovers a message that no one was expecting.

This one isn’t your typical alien invasion movie. There isn’t any horror to be found, nor is it overly preachy about the self-destructive nature of humanity or something like that. Instead, this movie focuses on creating an understanding between humans and aliens. What if the aliens have something important to say? Why is language so important? Arrival explores these various themes with its excellent story telling. (There is also a really good plot twist at the end that I won’t spoil.)

The Accountant – Directed by Gavin O’Connor, 2016

I’m a fan of action movies but they tend to get repetitive over the years. When I find one that stands out, I get excited. I do realize that Ben Affleck has been rather controversial recently so I don’t mean to promote him too much but, just hear me out about this movie.

Math savant Christian Wolff has made a career on cooking the books for crime families, mobs, and terrorists organizations. When the US Treasury closes in on him, he must undo the damage he’s done and save a new friend.

I have to give this movie props for having a unique main character. Christian has high-functioning autism and I felt that Affleck portrayed it in a realistic manner. It does somewhat perpetuate the myth that people with autism tend to be savants but it is not unrealistic by any means. It’s refreshing to see a protagonist who breaks the classic “Macho Man” role. If you are a fan of John Wick, then you will definitely like this movie. It is clever, action packed, and stands out in the action genre. I recommend you give this one a chance.

I would be lying to you if I said I wasn’t a huge superhero fan. I love MCU and all of the DC tv shows. The DC movies have yet to completely win me over but Wonder Woman was fantastic. Anyways, I was definitely sad to see Hugh Jackman retire Wolverine but I was at least glad that they gave him and Sir Patrick Stewart such an amazing exit. This movie is currently getting some much deserved Oscar buzz.

In the near future, an aging and reluctant Wolverine is charged with taking care of Professor X, who is going senile. Their quite lives are quickly upended when a young mutant arrives with dark forces following close behind.

The first thing I love about this movie was that they made it R-rated which was perfect for the character of Wolverine. This movie has some great Easter eggs for X-Men fans and give the perfect finale for such iconic characters. It’s touching, violent, and profound. Logan is an experience for any comic book fan as it takes the genre in a different direction that doesn’t rely on heavy special effects or anything too convoluted. (Not that I have a problem with that.)

This site uses Akismet to reduce spam. Learn how your comment data is processed.